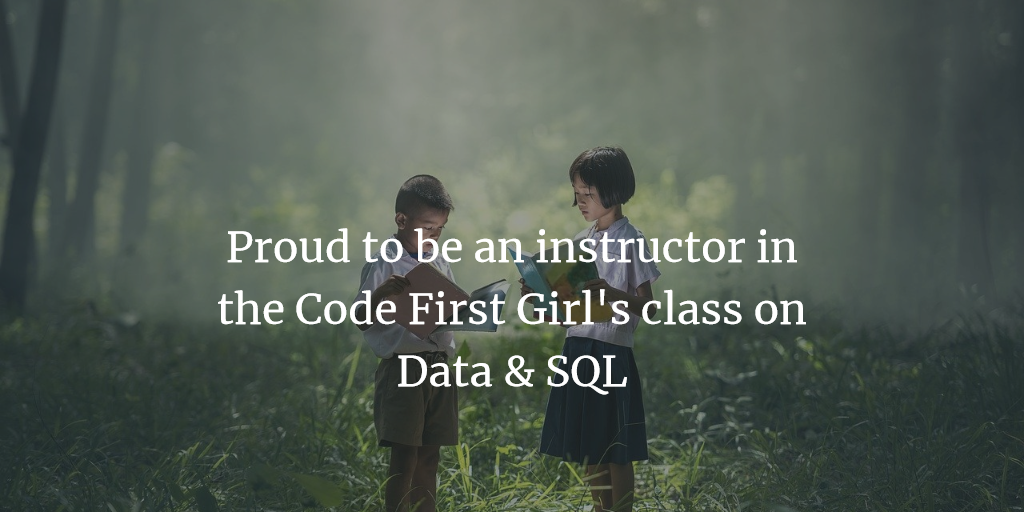 I have the great pleasure and honor to be a volunteer for Code First Girls. This is a UK based non profit organization with the mission to encourage young women to pursue a job in the Tech sector by giving them foundamentals in relevant skills such as programming or (in my case) SQL and Databases. I have been given the opportunity by Experian to volunteer in that course and share my expertise as a data professional.

What does that mean to me personally?

It actually means a big deal to me. I am a father to a five year old daughter and married to a Java Software Developer. I have always been proud of my wife to excel in such a tech role and reaching the same professional level in Programming as me within the database realm.

It’s a sad fact that many young women are scared away from tech as (historically speaking) this is seen as a man’s thing, the climate in a men-dominated industry can be rough or simply speaking women are not given the same chances as men. My wife took a special course of study which was designed exclusively for women at university. However from her fellow female students only a small percentage pursued a carreer within “Coding”…most going to project management instead. Well I could complain on that for a long time but it would not change anything. On the other hand some women make it into tech and really make a difference and valuable addition in the way they communicate and solve things in contrast to their male colleagues. I personally admire the ones who brought it to perfection and reached to the top in a technical world…shaping the industry alongside with men. These personal heroines of mine are Jen Stirrup , Kendra Little, Monica Rathbun, Mico Yuk and Deepthi Goguri…just to name a few (and as always this list is gonna be incomplete and there are a lot of other great women out there).

I have now been given the chance to acutally contribute something to a change by teaching young women about Data & SQL. For my own daughter I wish, that there will be no barriers for her to pursue a tech carreer in the future after she finishes school. I have no obsession, that she should pursue a career in tech: That’s totally her own decision later on as it should be. However I have the strong feeling, that she should not be discouraged by men dominating the tech industry.

I’ll be honest with you dear reader…of course it is also a great opportunity for promoting data jobs related to SQL Skills. I am still doing much of the work at my company on my own being the only data person (well I have got support from a great Data Scientist now…but his focus and tasks naturally are a bit different). I really love my job and the power of data analysis. However sometimes I feel a bit lonely. So this course is the perfect opportunity for me to show my passion and hopefully ignite others with it as data skills are crucial in the world we live in and are the entry ticket for great job opportunities.

For the SQL course it’s amazing: We have got a lot of people who are aspiring to change their carreer for example making the switch from a personal assistant or a travel manager to a tech role such as Data Analyst or Full Stack developer.